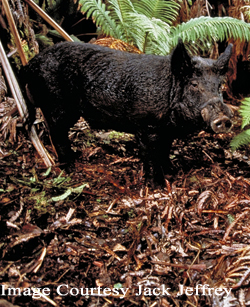 Distribution/Habitat/Diet: Found on all main islands except Lana’i. Widely distributed, but found mostly in wet forests and open mountain pastures. Forages for vegetation and worms by rooting in the ground.

Ecological Impact: Pua’a are responsible for great ecological damage by rooting and trampling native vegetation and spreading invasive plant species (such as strawberry guava and banana poka) over large distances. The pua’a also create water pools in depressions from their rooting and in cavities left behind after they’ve eaten the starchy interior of knocked down Tree Ferns. These water pools are an ideal breeding ground for mosquitoes that transmit avian malaria. Native forest bird habitat and numbers have been significantly reduced as a result of the feral pig’s introduction.