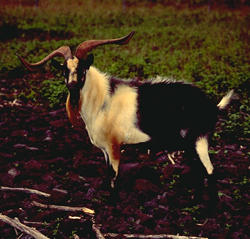 History: Introduced to Hawaiian Islands in 1778 by Captain James Cook.

Ecological Impact: Feral Goats forage on grasses and other vegetation and are particularly damaging to Hawaii’s native plants. In the 1960’s, Hawaii Volcanoes National Park fenced small areas to prevent goats from foraging and discovered native plants previously unseen came back and thrived in their absence. Since then, concentrated efforts to eradicate goats from the park include barrier fencing and the hunting and dispatching of animals.