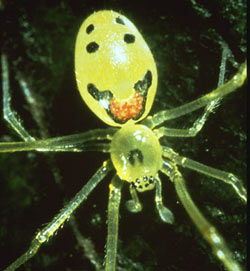 This spider is normally shy and retiring. It lives on the undersides of leaves in rainforests, mainly on the Big Island. It hunts primarily at night and feeds on small insects that it encounters. The “happy face” pattern is variable and has dozens of different patterns. It is thought by some that the patterns may keep them from being eaten by birds.

Often found on the leaves of Kawa’u, Kanawao and Kolea.