I do not particularly like or understand insects, especially moths with their inexplicable need to plaster themselves nightly against my windows and french doors.  I have found nothing to stop their relentless flight toward the light inside except turning off all my lights…but who wants to sit at home in the dark?

I wonder if that’s how Pele feels about people flocking to her recent “61g” lava flow.  Rivers and pools of lava dance at night, their dazzling glow drawing hundreds of spectators.  Not even the eyebrow-singeing heat, sulfur smell, or a strenuous hike over miles of jagged rock stop us from plastering ourselves along the edges of Pele’s domain to view the mesmerizing glow from the depths of Kilauea Volcano.
At 7.5 months pregnant, I became another moth unable to resist Pele’s orange glow.  Even as an avid hiker, it was against my better judgement to hike 10 miles of rugged, unstable terrain to view this spectacle. But the 61g lava flow had been pumping over the pali for a few days and who knew when it might stop.  Maybe in years, maybe tomorrow.  Armed with gear, water, and strong friends, I set out to see the lava up close on the afternoon of July 7th.
“Do we hear some huffing & puffing back there?” my friends teased.
I felt the strain of carrying a baby across crumbly lava which years ago cooled into shapes that, save for hazardous cracks, did not resemble a sidewalk.  “You try carrying a 15 lb bowling ball for miles,” I wheezed.
Just then I spotted movement.  An endemic Hawaii Wolf Spider cowered in a crack.  As I tried to coax it out for a closer look, something scattered off of the spider.  Babies!  I had been complaining about the weight of a single child, while she carted around a busload of children! 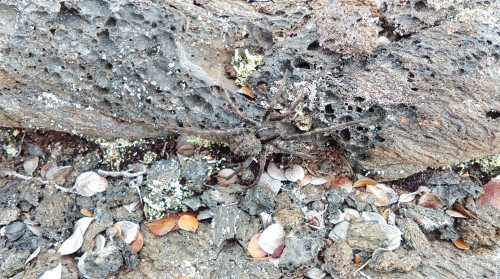 (Hawaiian Wolf Spider Lycosa sp.)
The spider emerged from the crack and the tiny babies reassembled onto her back, blending in perfectly with her fuzzy brown and black pattern.  She then scampered away carrying her precious cargo over the harsh terrain, as did I, with the light ahead pulling me forward.
Finally, I reached the edge of the flow.  Glowing fingers of lava spread over the slope in front of me.  Cooling crust crackled and popped open with new molten land oozing forth at my feet.  A thousand photos could not capture the warmth or the intense draw to get ever closer.  I understood the moth.  I then thought fondly of the native spider as I patted my belly and began the long hike back. 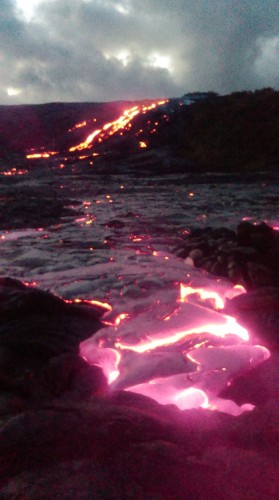 As long as Pele keeps the lights on:
* See the spectacular 61g lava flow from a distance and the lava lake glow at Halemaumau Crater on our Twilight Volcano tour.
* Access the lava flow up close on our new Kilauea Lava Hike tour (ONLY for avid hikers prepared for a grueling 6-10 mile trek)
Also:
* Learn about amazing adaptations of Hawaii’s native flora and fauna, such as the endemic Hawaii Wolf Spider, on all of ourHawaii Forest & Trail tours.
by April Nelson
7/9/2016

Two Down and a Couple Dozen More to Go