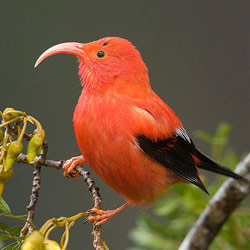 Distribution/Habitat: Once widely distributed on all islands, the ‘i’iwii are highly susceptible to avian pox and malaria and are now mostly found in ‘ohi’a and koa forests above the “mosquito zone”, on Hawai’i, Maui and Kaua’i.

In flight, the ‘i’iwii wings produce a distinctive whirring noise.