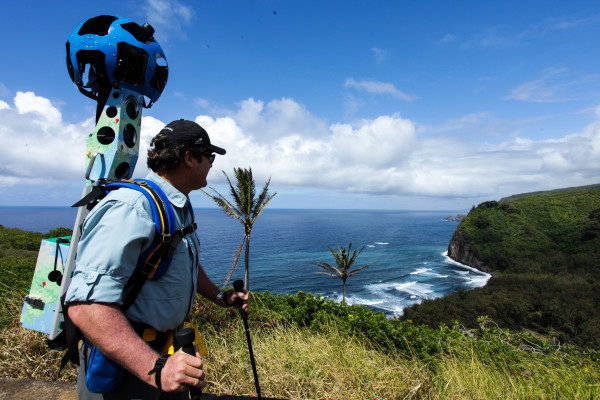 Why is Rob Pacheco, Hawaii Forest & Trail president and founder, carrying a blue soccer ball on top of his backpack? Because he’s super excited about the World Cup next year!

Nah, just kidding.  The truth is way cooler than the World Cup.

Rob happens to be wearing the latest, greatest piece of hardware from the good folks at Google called the Streat View Trekker.  Apart from having the ability to draw a more than its share of sidways glances, the Trekker is capable of capturing 75 mega-pixel, 360 degree panoramic images (panos) every 2.5 seconds and tagging each with GPS data.  Pretty cool, eh?  But it doesn’t stop there.  The Trekker can do all of that for about 6 – 8 hours on a single charge.

By now, your asking “why,” right?  Just to be the most fashionable backpacker on the trail?  As seriously as we take outdoor fashion, the answer is actually way more important than having the best duds and gear.  Hawaii Forest & Trail has partnered with Google and the Hawaii Visitors and Convention Bureau to carry this sophisticated piece of 21st-century backcountry technology on over 20 of Hawaii Island’s most scenic and inspiring trails.  Remember those big (yes, 75 mega-pixel is a BIG picture) images we told you the Trekker takes every 2.5 seconds?  Well, once we’re done taking the Trekker from the beginning of the trail to the end, we’ll send the hard drive containing all of that delicious data back to Google. 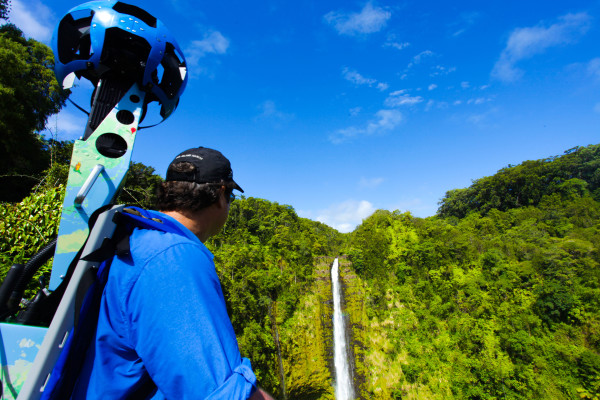 That’s when the real magic happens.  Google compiles all of that data and splices it together to create a fully immersive virtual trail accessible to the world on Google Maps.  Yes, Google Maps is going off-road!  This is a first of its kind partnership for Google.  For the last year, Google has been piloting the Trekker at the Grand Canyon and the Galapagos on their own.  The project in Hawaii represents the first time Google is lending the Trekker to a 3rd party and putting them in the proverbial driver’s seat . . . er, we mean hiking boots.  You can read all about the partnership with HVCB, Google and Hawaii Forest & Trail here, but the in the mean time, check back regularly as we’ll be posting about all of our treks!

I do not particularly like or understand insects, especially moths with their inexplicable need to…