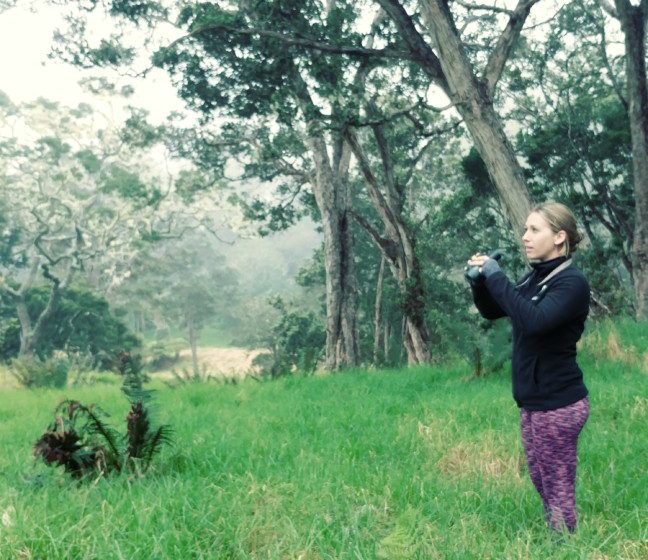 My car zoomed across Saddle road, the promise of adventure in the cold morning air. I was headed to Hakalau Wildlife Refuge, where I would meet with ‘the Friends of Hakalau’ for a rare opportunity to explore the refuge.

Established in 1985 as a National Wildlife Refuge, Hakalau’s rainforest habitat on the slope of Maunakea, is home to many rare and endangered plants and native honeycreepers.

After living on Hawaiʻi Island for 21 years, I was excited for a chance to see an ‘i’iwi for the first time. This scarlet colored honeycreeper is an iconic symbol of Hawai’i. In ancient times, chiefs (ali’i) dressed in intricate feather cloaks decorated with the feathers of native birds. These possessions were a way for aliʻi to showcase power and status, and were also believed to provide spiritual protection.

The group met at Puʻu Huluhulu and split into different SUV’s. My guide for the day was, Loretto, a Hilo local with contagious enthusiasm. We were joined by Mel, a friendly gal  also from Hilo-side. Loretto received his degree in Entomology, the study of insects. He joked that he was the outsider among the avid birders that made their way to Hakalau. Mel was a sociology major, with only one semester left to go to graduate. As a psychology major myself, we were an interesting group of academics.

We shared one thing in common: our love for Hawaiʻi. Growing up on Hawaiʻi Island instills aloha into our DNA.

As we drove towards Hakalau, Loretto talked about the attributes of the land and pulled over to admire an owl (pueo) flying nearby.  Once we reached Hakalau, we headed up to the Upper Maulua Trac to search for birds. The mist engulfed us we climbed and the higher elevation produced a dreamlike quality.

“What was that?” Mel asked as she heard a bird call.

We stopped the car and peered out, binoculars ready and searched the tops of trees.

No ʻiʻiwi…We saw yellow and brown birds darting quickly off treetops.  Their calls all joined together in the air, a cacophony of shrill squeak and trills. I tried to spot them with my binoculars, but they were too quick for me. By the time they were in my sights, they were long gone. I kept my eyes peeled for ‘iʻiwi, certain I would find one soon.

We drove further up the road to inspect the native ‘oha wai and hāhā growing. The mist set in deeper and the cold went to my bones. Loretto was kind enough to let me borrow his jacket. I stood shivering looking from tree to tree. I noticed birds far away on tree-tops, specks of red, brown, and yellow. I could generally identify the ‘i’iwi, but my binoculars blurred with rain.

As we headed back down the mountain I tried not to feel disappointed with my obscure sighting. I had witnessed a lot of really awesome birds and plants, and learned so much from Loretto and the other guides. As Loretto, Mel, and I were chatting enthusiastically, Loretto’s’ supervisor messaged him on his walkie-talkie. He let him know the other  guests were ready to leave. Loretto told him we had one more stop to make.

Loretto stopped the SUV near where we run tours for Hawaii Forest & Trail and we searched on foot, binoculars ready. The ‘iʻiwis’ squeaky “IWI!” could be heard resounding throughout the forest. With a grin plastered on my face I saw two at eye level, playing in the forest.

Curious, playful birds, the bright red ‘i’iwi flit towards trees, drinking from flowers with their curved bill. They moved at lightening speed, flying away in the blink of an eye, and appearing back just as quickly. Their vibrant red body and black wings made them a focal point in the forest. I couldn’t believe how many ‘i’iwi I saw, at such a close range! I felt so grateful that Loretto had made this special stop just for us, just so we could experience seeing them.

That night as I fell asleep in bed, it felt as though I had never left the forest. I could still hear the bird songs, like a chorus of instruments that were echoes from the past. The supernatural power (mana) I had felt there was so powerful in the forest. After visiting Hakalau it was easy to see why the area was sacred to the people of old Hawaiʻi.

I will never forget the deep connection I felt to hakalau and the people who traveled with me. My quest for ‘i’iwi had been a success.

Once again this February, I volunteered to help survey the Palila (Loxioides bailleui) on the…