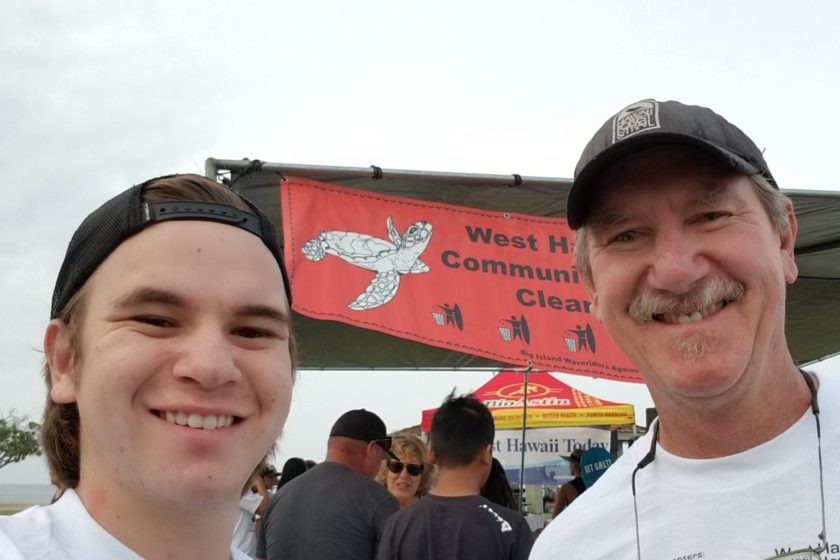 Beach Cleanup perspective with Terry & Alika Tolzmann –
—
Terry
While listening to the radio on Friday, March 2, I heard a call for Volunteers to assist in the clean up of West Hawaii Beaches on Saturday, March 3, 2018.
Both myself and Warehouse/Van washer Alika Tolzmann arrived at the Old Airport meeting spot at 7:30am the next morning (Alika had been washing vans until 4:00am). The turnout was astounding!  There were hundreds of people milling around, but it was impressively organized. There were about 2 dozen signup sheets representing various beaches and other West Hawaii sites. We signed up for Magic Sands and Kahalu’u Beach Park, received our volunteer t shirts and headed out. Since we were in the area, we stopped at a small beach park that my family likes to use, called Pahoehoe Beach Park. It wasn’t too bad, but we did find a few items, then moved on to Magic Sands. We were the first of the volunteers there and started the sweep. I was using an old wok scooper, which was perfect for picking up the most prevalent item – cigarette butts. I would guess that we found 75-100 on a sweep of about 1/2 the beach. Another group of volunteers showed up, so we relinquished our claim and moved on to Kahalu’u.
We found a similar situation. No big rubbish, but LOTS of cigarette butts and bottle caps. As was the case at Magic sands, another group of volunteers, in their  t shirt-uniforms showed up. this seemed to be a large extended ohaha – about 20 of them. So rather than let it escalate into a turf war, we wished them happy hunting and moved to the Keauhou Boat Ramp area. Made a stop at the story board near the birthplace of Kauikeouli, and picked up a few stray pieces of rubbish. For a boat ramp, it was pretty clean. One more stop, at the Battle of Kuamo’o to recharge the interp batteries, pick up a bunch of beer bottle caps (predominately Heinekin), and head to the Old Airport to drop off our collected items and enjoy a plate lunch.
I asked the head registrar, Ann, how many volunteers had participated. She said there were several sign up spots in addition to Old A’s (Puako, Miloli’i, Ka’u), so she didn’t have an exact #, but believed that it had exceeded 700!
We received several “Thank Yous” from beach goers while cleaning up, and a few actually pitched in to help.
—
Alika
The day right before the beach clean-up is when I first heard about it. My Dad, Terry Tolzmann told me that It would be relatively early in the morning. Getting off work at 4:00 in the morning only to have a few hours of sleep would probably deter most people. But I agreed to do it anyway, for I was taught the importance of community service. Not surprisingly I was quite tired when we were heading our way to the sign-up station after I finished a 10-hour work shift not that long ago. However, seeing so many people contribute to the community lifted my spirits and gave me the rest of the energy I needed to begin working. When we arrived we were instructed to sign-up for a particular location. Seeing very few signatures on Kahalu’u and Magic Sands, Naturally, we decided to help out where there seemed to be the least help.
Before we actually arrived at our intended locations we took a slight detour and decided to clean-up Pahoehoe beach. There wasn’t much in the way of trash, but you will be hard pressed to not find a cigarette butt on any beach in the world. As we cleaned what little there was we were on our way to the other two beaches. Before we left though we were stopped by a small family, a mother and a daughter to thank us for our service. After conversing with the mother for a little while we had learned that she too was involved in beach clean-ups where she was from. And sadly, the beaches of Canada were no different than other beaches around the world, covered in cigarette butts. After we said our goodbyes we headed on over to the other beaches.
Initially, we were the first volunteers at Kahaluu beach park. So we continued to clean until we saw droves of other volunteers starting to appear. We had been there for a while and did a good sweep of the area and decided to let the other volunteers take over where we left off. The rest of the day was very similar. Move to a beach, be the first ones there, clean up a good amount, then leave after a while when the other volunteers showed up. By the time we were done cleaning the other beaches, (more than we had originally signed up for) we headed back to the sign-in station to drop off our rubbish. It must have been a little after 1:00 in the afternoon when we got back.
Overall it was a pretty productive day, and seeing so many people volunteer and seeing the difference one day cleaning the beaches cemented my belief on how important community service is. I would proudly serve my community at an event like this again and again. I could say that the plate lunch afterward was the most rewarding part of the day, but there’s nothing quite like the satisfaction of knowing you made a difference.

Once again this February, I volunteered to help survey the Palila (Loxioides bailleui) on the…

Searching for ʻiʻiwi by Julie Neuman

My car zoomed across Saddle road, the promise of adventure in the cold morning air.…